I just got back from the AISP conference at the University of Pennsylvania.  That was a very inspirational conference!  We heard from many of the members of the AISP network.  Two should be mentioned: Indiana and Allegheny County, Pennsylvania.  Indiana now has an enabling statute where the analytics office is supported by legislative funding.  They even have a staff of 30 people, including data scientists and analysts.  Meanwhile, Allegheny County has been implementing effective government through data analysis for 20 years.  We heard about how they are focused on the opioid epidemic and how they are using data to combat it in their county.  Both of these jurisdictions have inter-agency data warehouses to do their analytics.  Very inspirational stuff.

Here is the link for the Actionable Intelligence for Social Policy network: https://www.aisp.upenn.edu/

I have the great pleasure to report that I am back in civic technology.  I my new role as a data scientist with the State of Colorado, I will be merging siloed datasets from different agencies to create usable, anonymized data that researchers and policy makers can use to inform public policy recommendations!

Just a bit more about my new position….I am working for the University of Denver as a contractor to the Office of Information Technology for the State of Colorado.  I will be working across the various agencies and with IT and the Colorado Evaluation and Action Lab’s LINC (Linked Information Network of Colorado project).  This is a great opportunity to do important work for the state of Colorado.

Here are a few examples of the kinds of projects that I will be working on:

– What are the primary factors affecting non-custodial parents in the timely payment of child support payments?

What factors are associated with multi-system utilizers of the Colorado health care system?

The Denver Google Developer Group set up a meeting to watch the simulcast broadcast of the keynote by Sundar Pichal and related speeches.  The meeting was held over at GoSpotCheck, a startup doing retail inventory verification using AI and machine learning.

The keynote echoed the expected themes: vision, audio, and AI.  Google is developing the building block technologies to increase the amount of AI and machine learning tools that can be deployed.  This means that they not have AI training boards that can do petaflops of computations, they have new libraries for audio and vision, they have expanded TensorFlow to include more than just tensors/neural nets (i.e., other machine learning algorithms like random forest and support vector machine), and they are creating TensorFlow libraries that will run with javascript.  This means that AI models can be pushed down to Android cell phones and tablets and can also call upon their off-the-shelf tools that they have developed.

Bottom line: Between Caffe2,  TensorFlow, Python, and R, there are an abundance of open source tools to do machine learning.

On the meeting side, I met some great people doing interesting development, and I even won a Google laptop bag as one of the raffle prizes!

I finished my Masters degree in data science from Northwestern University this past week.*  I had a fabulous team for my final Capstone project class.  The group wanted to work on a text mining project, so I recommended using a dataset over at Kaggle on the Meyers Briggs Temperament Indicator.  Our goal was to identify which personality archetype a person was based on a single sentence of a posting.

The the video presentation that we created follows. My portion about the data and model development begins about seven minutes into the presentation:

I handled the modeling portion of the project, and so I created models in both Python and R.  The neural network models used both TensorFlow and Keras, running on the GPU card in my computer.  In addition, I created a naive Bayes and Support Vector Machine set of models.  Then I combined these models into an ensemble, and my final ensemble was significantly better than a random guess.

Now that I have finished the program, I am now looking for data science work.  If you know of an engaging opportunity, please contact me.

I am here in Athens to ring in the new year.  Here’s the view out the window from my desk.

While I have been here, I have walked down the streets of the agora where Socrates and Plato walked.  I have thought, “That is absolutely amazing that they had such an advanced view 2500 years ago.”  They thought that pretty much anything was open for discussion and analysis, and that logic and reason ought to prevail.  That’s a pretty good ideal…let’s have more of that.

I have seen many relatives in Finland.  Here’s a second cousin (whose name I’ll withhold for privacy).  What do you think….is there a family resemblance?

The trip was a very interesting one.  I saw my DNA in its many forms, but not obscured with American culture.  And I came away understanding a great deal about myself.  I met many people with whom there was a near-instant bond that transcended culture.  It was obvious within minutes that we were alike even though separated by 100 years and two different cultures.

I’ve always been one to think in contingencies.  Not only have a plan B, but a plan C and plan D.  And I found in Finland a culture that thinks the same ways.   And it became apparent that the climate is so harsh in the winter that failure to think that way killed off those who did not.  It’s no surprise that I have this quality; it’s not really luck, but rather the result of thousands of years of necessity embedding itself as a DNA rule.

Well, my scanning is now complete of the old photos, and I have turned to editing them.  The original is fading, but the edited photo of my great grandmother Alma and her kids (Linda, Matt), was restored to how it looked in circa 1910 when it was taken. 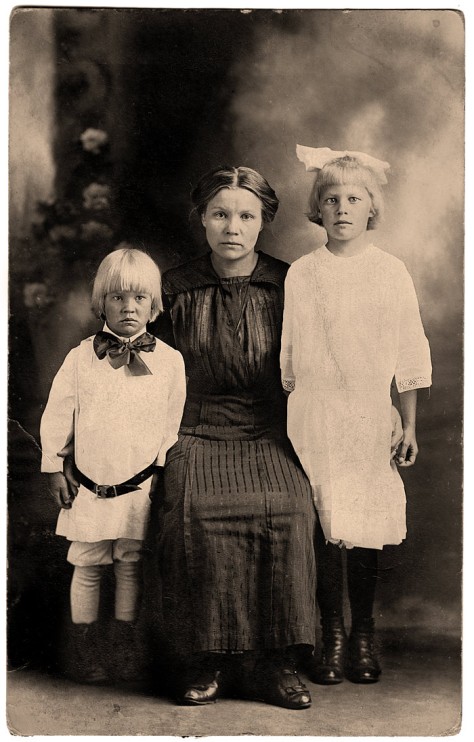 Look at those details that I was able to bring out.  you can see the strands of hair and the detail on the dress.  I also did an edit of the marriage photo that was previously posted.

To do this sort of work, I recommend scanning in the photos in RAW mode at very high resolution (4800 dpi).  I did detail enhancement with some HDR tools, but the majority of the retouching was done in Photoshop.

The past few weeks were great weeks.  As a result of research done by the Karstula parish in Finland, I knew that my great great grandmother Mathilda had come to America in 1901.  Her husband had died, and she remarried and had another girl Ottilia at the age of 43.  Her new husband had already come to Ohio, and she was now following with her infant daughter and 19 year old teenager (my great grandmother).  Sadly, Mathilda died about six months after arriving, but my great grandmother found a husband, and here is their photograph circa 1902. 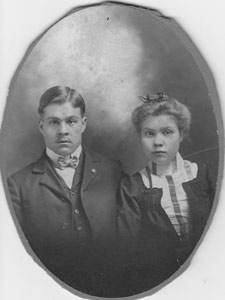 The only reason that I have this photograph is because I had been doing genealogy research before I came to Finland.  And so I researched the descendants of baby Ottilia and discovered that her descendants were living in Ohio.  That was great, and so I called some of them up just hoping for a return call.

They did call back and are very nice people.  And, in fact, they knew my great grandmother and some of her offspring.  When the eldest daughter of the people in the photo died, these descendants of Ottilia had the task of cleaning out her home, and they found the four photo albums and kept them safe.  FOR 50 YEARS!  Some photographs probably have no remaining duplicate.   REMARKABLE.  I have much to thank for my cousins’ careful attention to the matter.

This cautionary tale is reason alone to make this post.  Before you toss old photographs, consider whether there may be someone else for whom the photos may be invaluable.  That alone is enough.   But there is more.

As I flipped through the photos, I saw a photo of my son looking from the pages.  It wasn’t, but it was. 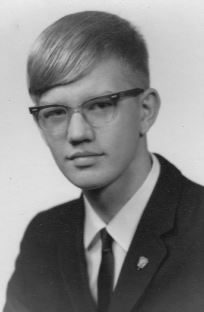 If you know my son George Hokkanen, then you will immediately recognize how remarkable the resemblance is between my cousin Tom and George of the same age.  ASTOUNDING.

My mother had opined (in that funny way that Finns may share their opinion) that George did not look like any of the Hokkanens.  There were multiple interpretations of that remark, some better than others if you know what I mean, and it was very much like her to make ambiguous remarks like this.  But she was certainly correct in the most literal sense–at least with respect to the family photos that we had, George made no appearance.  But we didn’t have the photos of Ottilia and her descendants!

Gene expression is a funny thing.  You get two copies of every gene, one of which may be domant until it isn’t, and gene sequences can pass for many generations unimpacted. And so your doppelganger may just be 2nd or 3rd cousin.

In deference to the culture which I am now in, I went out for afternoon coffee at the neighborhood coffee shop.  (Usually I only have coffee in the morning.)  In further deference, I selected a piece of pulla to have with my coffee.

The taste of the finely-textured, semi-sweet dessert bread with the distinct taste of cardamom brought back memories of mummo Anna (i.e., Grandmother Anna)  that would make it at my house several times a week when I was growing up.  This was some sort of specialty pulla given related to the upcoming Easter season, and this had both berries and a glaze and a splash of powdered sugar.  I had never eaten a pulla like this, but it was quite a treat with the coffee–which, in deference to my origin, was an Americano!  Note to dad: I did not, however, dunk the pulla in the coffee.

This video from the Netherlands should be very amusing, even to those who voted for Trump.  It is very clever.

See beyond the horizon with predictive analytics. 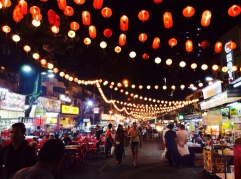 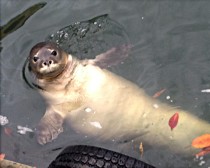 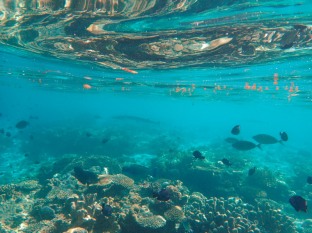 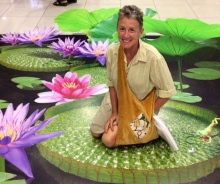 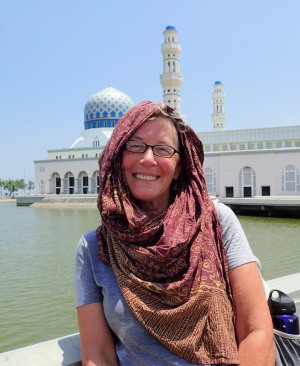 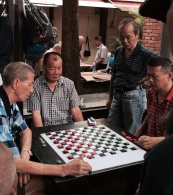